What to see in Glasgow, Scotland 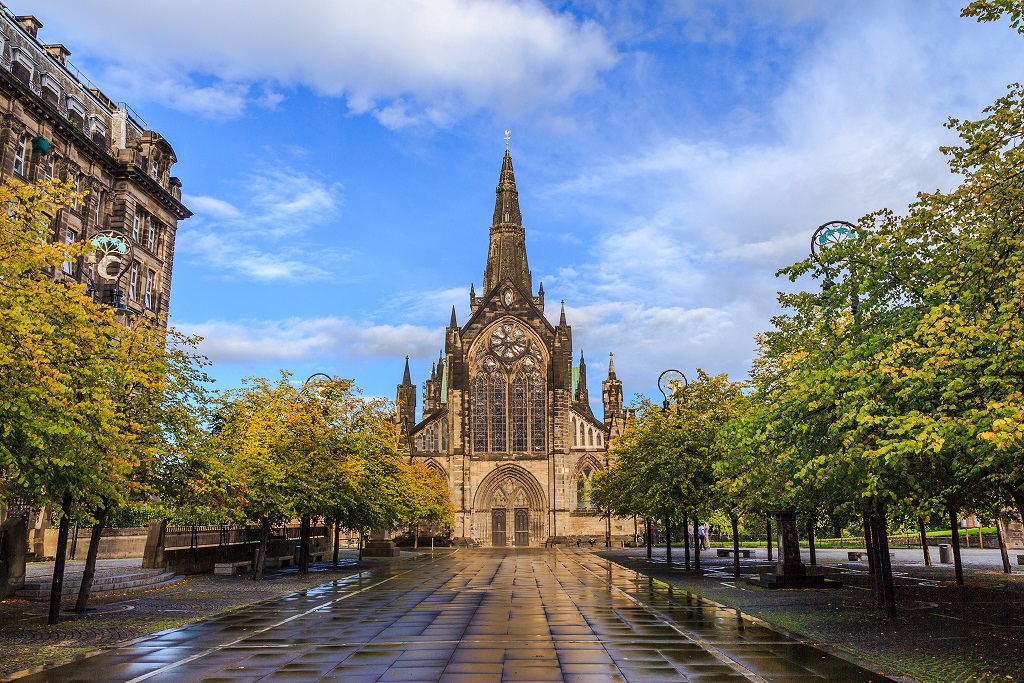 13 Apr What to see in Glasgow, Scotland

Modern and lively, elegant and stimulating, Glasgow is a large city in Scotland and today considered a real tourist and cultural hub that is trying, especially in recent years, to enhance its art, focusing on architecture and design enthusiasts.

Glasgow is the second stop in Scotland chosen by tourists, after the capital Edinburgh, and is certainly a destination worth visiting.

Want to find out more about what to see in Glasgow? You have come to the right place: relax as our journey to discover the Scottish city is about to begin!

Where is Glasgow located?

Before starting our tour and discovering this incredible destination in Scotland, let’s see where this city is located. Glasgow is a city in south-central Scotland located on the banks of the River Clyde. The economic capital of the country, Glasgow is the largest city in Scotland by the number of inhabitants and the third-largest in the whole of the United Kingdom.

The climate in Glasgow is temperate and typically Anglo-Saxon: abundant and frequent rains throughout the year as well as relatively low temperatures. Winters in the Scottish city are long and gray, while summers tend to be cold and rainy. So if you decide to visit Glasgow, remember to always pack an umbrella!

However, the ideal season to visit the Scottish city is summer, in the period from May to September, when the days become slightly sunnier and more pleasant.

In Scotland, the British pound is used, whose exchange rate is currently 1.12 euros. Therefore it is advisable to change before departure or to bring a credit card

Getting around Glasgow is pretty straightforward. In fact, the Scottish town has an efficient local public transport network that will allow you to move easily from one part of the city to another.

The main means of local transport are:

Who knew Glasgow’s underground is the third oldest in the world? In fact, the city metro was built shortly after London and Budapest and opened to the public on December 14, 1896. Glasgow metro, also known as Clockwork Orange, is only 10.5 km long and is open from 6:30 to 23:40. Monday to Saturday and Sunday from 10 am to 6 pm. The single ticket costs £ 1.50 per adult and the day ticket costs just £ 2.90.

The alternative to the metro is the local buses, which each year host thousands of passengers and whose lines are managed by the SPT company, which will take you wherever you want.

Finally, we have the taxi, obviously, the most comfortable way to get around, but also the most expensive ever (Uber service is still available).

What to see in Glasgow

Capital of design and culture, Glasgow is certainly a place to discover, full of interesting attractions, museums, and art galleries that make all fans dream.

A futuristic and avant-garde city, totally re-evaluated by tourists who actually choose it and are pleasantly surprised.

Here is a list of what to see in Glasgow during your stay here:

Glasgow Cathedral, one of the city’s ancient buildings, in English Gothic style, with a suggestive medieval atmosphere. Do not miss the monumental cemetery behind the cathedral and a visit to the tomb of St. Mungo, now the patron saint of the Scottish city;

Burrell Collection, an original collection that ranges from Chinese ceramics to Etruscan terracotta, up to Greek sculptures and which includes, within it, many works by French, Flemish, Dutch and German artists;

Science Center, the perfect place for the little ones but also for those who love to explore, discover and observe the world with different eyes. Futuristic and super technological, the Science Center has over 300 interactive attractions inside, which embrace the sectors of science and space and take the tourist on a real journey that leaves you speechless;

Riverside Museum,  an ultra-modern building, which houses a collection of historic vehicles and cutting-edge interactive exhibits;

Kelvingrove,  the civic museum of Glasgow in Scotland, located in Argyle Street, in the West End, on the banks of the River Kelvin, inside which it is possible to find works by Botticelli and Salvador Dalì;

Scottish Opera and Scottish Ballet,  respectively a classical theater and dance company, famous all over the world;

George Square, a  square named after King George III and dating back to 1781, where you can admire the statues of some famous Scottish characters.

Lighthouse,  emblem of the Art and Design of the city of Glasgow, designed in 1895 by Charles Rennie Mackintosh;

The University of Glasgow, founded in 1451, is the second oldest university in Scotland and the fourth in the whole English-speaking world, built at the behest of Pope Nicholas V, it is now considered one of the most important in the United Kingdom;

What to eat in Glasgow

Glasgow, while not having a real culinary tradition, has also managed to give the gastronomy an extra touch, something innovative that tourists seem to like a lot.

The city in fact has a rather creative and innovative gastronomic tradition, which ranges from the classic local products of British cuisine (salmon, oysters, seafood, etc.) to traditional Scottish dishes, including the famous Haggis, a typically Scottish specialty based on sheep entrails, minced with onion, oatmeal, salt, and spices.

Let’s see together what are the other Scottish specialties to try in Glasgow:

What to do in the evening in Glasgow

Glasgow by night lights up even before the sun begins to set: the clubs, in fact, already in the late afternoon are filled with people ready to have fun and to inaugurate the weekend in the best possible way.

The busiest area in the evening is the northwest of the city and of course the center of Glasgow. In particular, the West End and Ashton Lane neighborhoods, and the Sauchiehall area, are always full of students and young people, ready to have fun.

Here is a list of places to go in Glasgow in the evening: